The United States Patent and Trademark Office (USPTO) issued U.S. patent number 10 million on June 19, 2018. More than just a number, patent 10 million embodies the rich history and strength of the American intellectual property system dating back to the first U.S. patent, signed 228 years ago by George Washington on July 31, 1790, and issued to Samuel Hopkins for a process of making potash, an ingredient used in fertilizer. 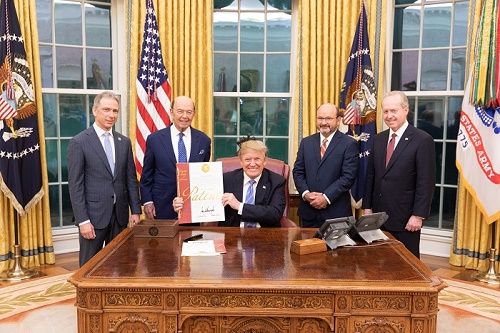 The milestone was enshrined during an afternoon ceremony at the White House in which President Donald J. Trump, Secretary of Commerce Wilbur Ross, and USPTO Director Andrei Iancu all signed the patent. The last president to sign a patent was Gerald Ford in 1976 to commemorate the U.S. bicentennial. All early presidents up to John Quincy Adams signed patent documents.

"Innovation has been the lifeblood of this country since its founding," said Secretary of Commerce Wilbur Ross. "Our patent system's importance to the daily lives of every American has never been greater. Given the rapid pace of change, we know that it will not take another 228 years to achieve the next 10-million-patent milestone."

Patent 10 million for "Coherent Ladar Using Intra-Pixel Quadrature Detection" symbolizes the breadth of American invention, with applications in such varied fields as autonomous vehicles, medical imaging devices, military defense systems, and space and undersea exploration. The technology was invented by Joseph Marron and is owned by Raytheon Company. 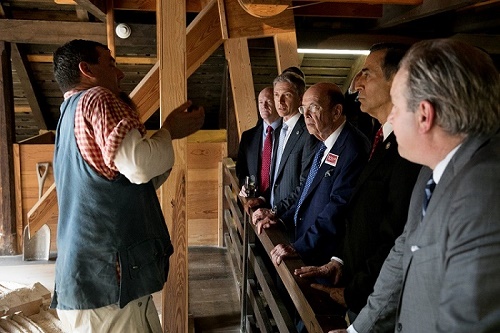 "This patent represents one of ten million steps on a continuum of human accomplishment launched when our Founding Fathers provided for intellectual property protection in our Constitution," said Under Secretary of Commerce for Intellectual Property and Director of the United States Patent and Trademark Office Andrei Iancu. "Some of the greatest leaps humanity has made have been fueled by our greatest inventors, Americans who have changed the course of history with their brilliance and dogged perseverance."

"The U.S. patent system serves as a reminder that our nation values and continues to be built by those who are willing to take risks, challenge traditions, push the boundaries of convention, and test new limits in design and thought," said Commissioner for Patents Drew Hirshfeld.

This milestone of human ingenuity perhaps exceeds even the Founding Fathers’ expectations when they called for a patent system in the Constitution to "promote the Progress of Science and useful Arts.